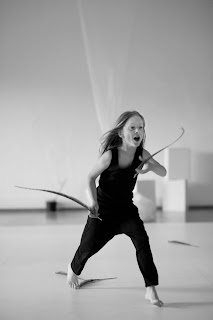 AKS received well-deserved applause upon the conclusion of her latest and boldest choreographic experiment to date. time code 9733, presented at ART SPACE in Stift Millstatt, integrates audience and fantastic dance technique, and examines a universe built upon reality and vision. The work pulled viewers into the performance by allowing them to move freely within a precisely calculated, changeable spacial installation with live-designed film projections – and quite successfully! Excitement and curiosity drew viewers from a dark chamber, disjointed by grand cinematic images depicting both ideal and broken worlds of memory and fantasy, into a room of light.
There, a group of diverse dancers, which even included an 8-year-old boy (!), built upon that which had been rescued from the darkness in a far-east-inspired “ritual” with symbolic use of feathers, a chalice and a crown. A worthwhile experience!
Andrea Hein, Die Krone, 30. May 2015
translated by hrgb