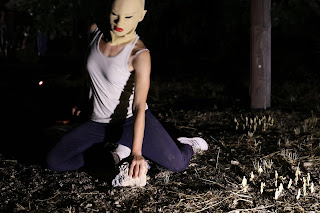 On 12th of July, Roman Zotter and I had the pleasure to represent NETZWERK AKS at Tsak Bam Festival – a contemporary arts festival on the island of Aegina in Greece, which we co-organise together with a team of artists.

We created a new adaptation of the piece # bones, an original concept and choreography of Andrea K. Schlehwein created in collaboration with the two of us.
For the new adaptation we decided to stay close to the original structure and material with the desire to observe and study small mutations happening because of the different environments.

The pistachio field where the performance took place in between the trees filled us with new sensations. It was precious to work under the open skies with the moon above and the sea breeze.

No lines. No walls. The sense of orientation completely altered. 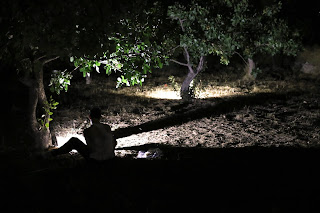 Earth, stones and dry grass under the feet and many little thorns - which I still try to remove from my clothes - brought an extra challenge to each shift of weight, reminding to not take any movement for granted. Experiencing the body anew because of the environment.
In the absence of lines outside, the desire to create geometrical shapes with the body grew.
The triangle as a shape felt perfectly suited to this place for some unknown reason.
Creating a little 'stage' in between 3 trees and playing endlessly with triangles connecting points in constantly changing distances.

Child-like joy. A gradual invitation of new points / fragments of imaginations and memories / mixing the seen with the unseen / creating an experience of being there and inviting the possibility of being anywhere else at the same time.

After the performance we received very positive responses about the work. People were deeply moved by the intensity, depth, articulation and freedom. Some of them to tears... 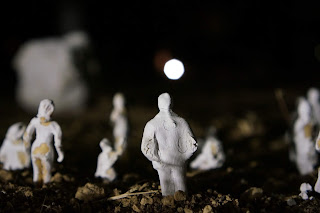 The little figurines standing on the ground prior to the performance were perceived as an art piece on its own and were photographed by many people from the audience. They kept asking who the artist was who created them... some people even made very interesting connections between these figures and Cycladic art.

I had to smile, knowing what they were: mass produced plastic figurines for architectural models that we bathed all together in whitewash (the same material we use to paint the well-known postcard image houses on the Greek islands of Cyclades) because there was simply no time to color them carefully one by one...

Most people were especially intrigued by the part with the mask. They felt it is rich and full of potential and it should develop as a piece on its own.
It makes a lot of sense to know that in September we are going to Goyang in Korea to do exactly this: Dedicate time to study and expand this part into a new version of the piece together with Korean dancers. 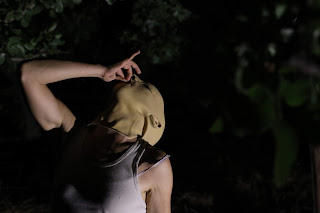 Many young kids saw the piece, a fact which made me worried because of a part that feels a little scary to me. In this part I wear a mask and I "eat" some of the small figurines. After the performance one 5 year old girl came to ask me what I wanted to say by doing this. I asked her what she thought and she said that it is about abusing each other in this world. She said she wasn't scared when she saw it, but she was concerned if she would have bad dreams.
Then another 7 old girl came to tell her "Art is art. There is no scary in art. Let's play!" and so they did.

I still don't know what this means, but her conviction was so joyful. I love to take this statement with me in order to continue exploring the world of #bones.

Another artist asked me about my specific relation to the earth of the island because for her the piece was centring there.
For me Aegina's earth is about facing and overcoming basic fear.
Meanwhile Andrea's directions from previous versions of the piece (hearing the death knocking on my door - stopping for a moment - but deciding to continue) ring in my head. New connections are forming in my brain about this piece's relation to death.

I feel this work has a long future and I am in the very beginning.
Stirring my existential soup, each time diving to bring out a new fragment on the surface.

Looking forward to the new journeys...

...from the first period of rehearsal at ART SPACE stift millstatt

Arriving. Meeting the former process that took place in ART SPACE through the bodies exploring the resonances of the Symposium POSITIONEN 019. Meeting Andrea, Eleonore and Unita, and several more people already in dance mood. Meeting all in transition and, after our Argentina experience, allowing so the open curiosity to let the same space to start insinuating and suggesting what new forms Golden Shadows will embody here.

Art forms aiming for simple and concrete exploration of our actual nature in fragile and delicate balance, always shifting, always moving. An art form that invites for sensible reflection of our nowadays sense of shared reality. 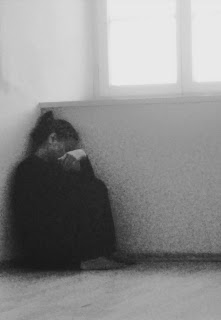 We have written already that the rehearsal process for GOLDEN SHADOWS is based on exploring our perception of body as a (sub) conscious moving space entity, a space where subtle impulses are flowing and leading. We practiced these days with Unita listening to those signals rooted in the hidden realms of its physicality; arising, expanding and dissolving in a continuous dancing dialogue with the surrounding. We found objects on our way to the studio, discarded and natural ones. We went on excursion for getting some others. We discuss and try on their potential utility, for organic actions, their expressive power, their sense of building landscapes and unfolding environments. Creating containers, passages, membranes where the performance will take place, the installation will invite to the visitors to accompany, sit, interact and contemplate.
And in those spaces our bodies are also pure space. Our bodies resonating among each other, also with images, figures and their individual an common memories. Our bodies inspired by sensing, by touch, by text, by textures.

“The dance appeals to the natal clumsiness. It appeals to all the gestures of the children. 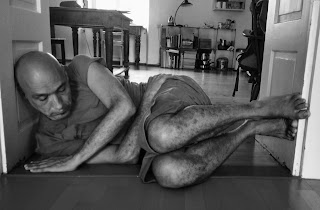 From Monday on, we will be on the way for the setting up of the installation. Some days
more for the opening night. Almost one more week to nurture our body-scapes, and let to these Golden Shadows to emerge as a new born organism attracted by the light, offering the opportunity to tell us a little bit of what is nesting there in those realms where the shadows reign and life silently pulse. 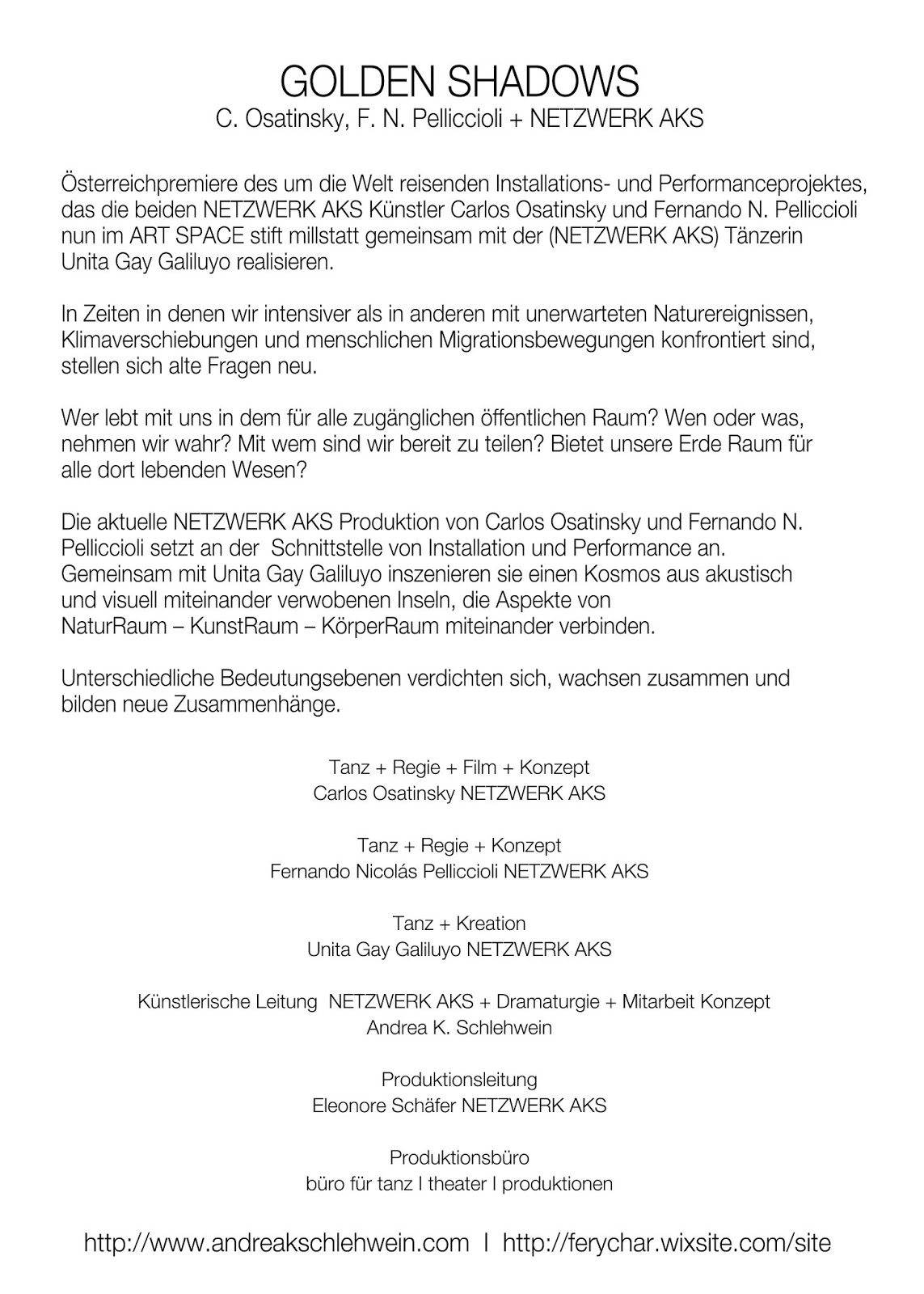 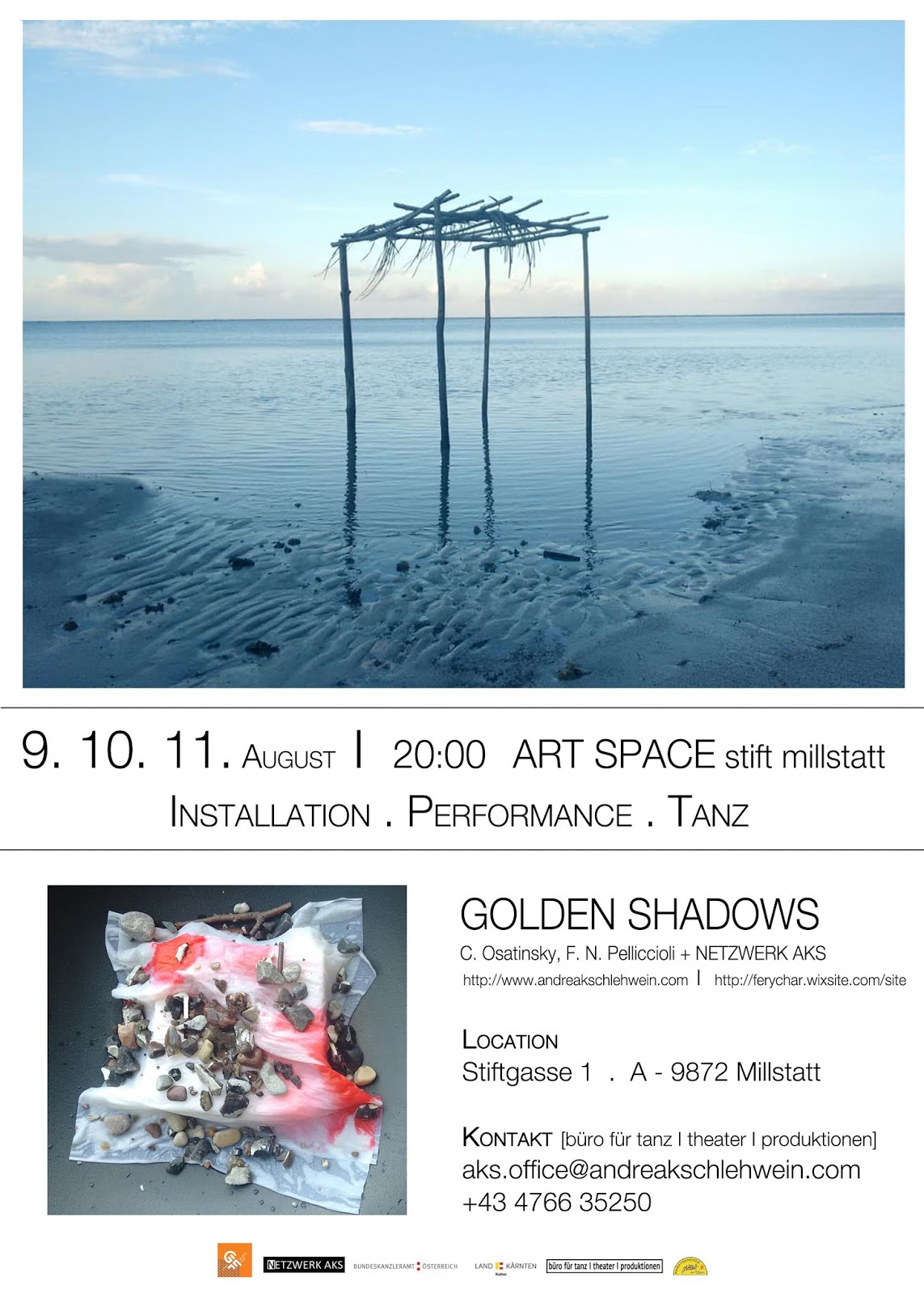